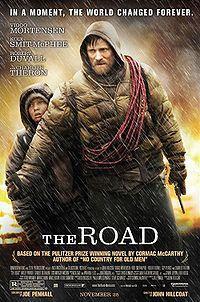 No Country for Old Men was the first exposure I had to the works of Cormac McCarthy, and while I only saw the Oscar-winning film version by the Coen Brothers, I could tell that this guy had some seriously bleak imagery in his head that he was putting forth.  His post-apocalyptic Pulitzer Prize-winning novel, The Road, was adapted into a feature film, directed by John Hillcoat, and it was bleaker than I would have expected.

The movie - like the novel - takes place during an unspecified period of time after the world has been affected by some apocalyptic event.  Nature is dying, animals are gone, and humans have devolved into groups of nomadic travelers trying to survive against those who resorted to cannibalism.  We follow a father (Viggo Mortensen) and his son (Kodi Smit-McPhee) as they travel to the coast, because they would not be able to survive another winter in their home.  The mother (Charlize Theron) had killed herself rather than try to survive, since she doesn't see the purpose of living in a world where everything is dying.

As the man and boy travel, they try to avoid roaming gangs of cannibals, fight off sickness, and encounter the occasional stranger.  With only two bullets left in their gun - with the intention to use it on themselves if need be - every encounter is a tense one.  Even an old wanderer (Robert Duvall) who poses no threat is treated with some hostility - it's only because of the boy's insistence that any food and charity is given.  The man keeps insisting that they are the good guys, but with each encounter, the question of who is good and who is bad starts to get muddled.

The idea of how humanity would try to survive  - and whether it would lose that which makes us human in the process - is a truly powerful one.  Visually, The Road is depressing, with the cold weather and ruins of society scattered around the travelers.  The performances by Mortensen and Smit-McPhee are great, and Theron does an effective job in the flashbacks of giving the Man some the more significant emotional moments.  The music, by Nick Cave and Warren Ellis, is sparse and austere, but has a nice theme that carries over the emotional aspects of the film.

The only real problem I had with The Road is that it just starts and stops. There is no real moral to the story, no real plot. Things just happen, and then it's over.  But that's a minor point. I should note that I haven't read the book, but will definitely do so, having seen the film. It's a slice of post-apocalyptic life, and it's depressing to see what the world has become.  It's a strongly crafted and haunting, and well worth checking out.