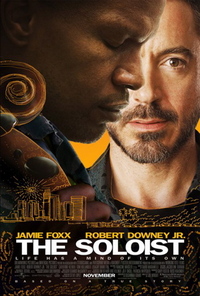 The Soloist is based on the emotional true story about the unlikely relationship between LA Times columnist Steve Lopez (Robert Downey Jr.) and homeless schizophrenic Nathaniel Ayers (Jamie Foxx) - who happens to be a Juilliard drop-out.  When Lopez encounters Ayers in Pershing Square in downtown Los Angeles, he's fascinated by the clearly mentally ill man.  But the more he learns about him, including his amazing musical skills, the more Lopez realizes that there is something more here than just some crazy homeless person, and he decides to write a series of columns about Nathanial.  A sympathetic reader sends Ayers a cello through Lopez, and Lopes uses the stick-and-carrot approach to try to get Ayers the help he so desperately needs.  In the process, their friendship grows, but hits some bumps along the road.

Directed by Joe Wright (Atonement) and written by Susannah Grant (Erin Brockovich), The Soloist is a film that slowly builds up the characters at the expense of plot, and demonstrates (with little subtlety) the blight that is Skid Row in downtown LA.  With an excellent performances by Foxx and Downey Jr., and solid supporting roles filled by Catherine Keener, Tom Hollander and Lisa Gay Hamilton, it's easier to accept the proselytizing about mental illness and homelessness.  The use of flashbacks to show Ayers' descent into schizophrenia and his turbulent relationship with his sister (Hamilton) is noteworthy, as are the musical sequences which take a more abstract poetic approach.

The film was due to come out in theaters in the winter of 2008 in time for awards consideration, but was pushed to late April, where it was lost amidst the pre-summer flurry of releases.  Now the film comes to DVD and Blu-ray, with a modest spattering of special features.  The anamorphic transfer for the DVD of The Soloist is a solid one, with natural skin-tones effectively rendered, and no noticeable compression artifacts to speak of.  Audio on the DVD is available in English, French and Spanish Dolby Digital 5.1, and as the film is a dialogue-driven film, is pretty straightforward.  It does showcase the music sequences quite nicely, with Dario Marianelli's score and the Beethoven source material beautifully presented.

The extras begin with a feature-length commentary track by director Joe Wright.  It's an interesting track; this was Wright's first feature film shot in Los Angeles.  He touches upon the challenges of shooting in downtown LA near skid row, as well as the rather impressive authentic use of real homeless people in the film.  It is a bit meandering at times, but overall this is a fairly well done commentary track.

"An Unlikely Friendship: Making The Soloist" (19.5-min) features the cast and crew talking about filming the movie.  The challenge of representing real characters are discussed, as well as training Foxx to mime playing a cello, filming near Skid Row, and other aspects of the production are explored.  "Kindness, Courtesy and Respect: Mr. Ayers + Mr. Lopez" (5-min) is a short piece with the real Lopez and Ayers, talking about how they first met and their friendship.

"One Size Does Not Fit All: Addressing Homelessness in Los Angeles" (10-min) is a depressing yet important look at the problem facing most cities across the nation, with a focus on the problem here in LA and how some organizations (such as LAMP, featured in the film) are trying to combat the issue. "Beth's Story" (2-min) is a short animated PSA about how a woman named Beth becomes homeless - it's bleak and emphasizes the need to put a human face to the problem of homelessness.  Finally, "Deleted Scenes" (10-min) are included, some of which deserve to have been dropped, but they give a little more insight into the main characters.

There were no trailers and no features on the music in the film, which is a shame since music was so central to the storyline.  There could have easily been a whole featurette about filming in the Walt Disney Concert Hall, or recreating Juilliard, or recording the musical score with the LA Philharmonic, but sadly those were not to be.  The Soloist is a solid film driven primarily by the strong performances from the leads.  It was not the retread of The Caveman's Valentine that I had feared, and while it provides no answers to the issues of schizophrenia and homelessness, it is an inspiring take that is certainly worth a look.