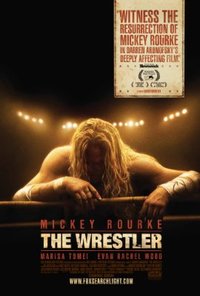 Darren Aronofsky\'s The Wrestler is a stark and sobering character study of a man way past the prime of his life. Once a professional wrestling superstar in the 1980s, Randy \"The Ram\" Robinson (Mickey Rourke) is now at the twilight of his career: he lives in a trailer home that he can barely afford, works at a grocery store, and wrestles on the weekends for money. When he has a heart attack after a match, he realizes he has to put his life in order, and so he retires from wrestling. He tries to strike up a relationship with Pam (Marisa Tomei), a stripper at a club he frequents. He also tries to reconnect with his estranged daughter Stephanie (Evan Rachel Wood), and work at the deli counter at the grocery store. But he is unable to deny who he is, and the prospect of a rematch with \"The Ayatollah\", twenty years after the historic bout, might be enough to lure him back to the ring - but at a cost.

Aronofsky shot the film in a documentary style, with lots of handheld shots and lengthy takes. It gives it a very realistic and - at times - brutal edge to the sad life that Randy has led. The wrestling scenes are almost painful to watch, and a few tricks of the trade are shown, including the practice of using a hidden razor blade to cut your own face for dramatic effect. It\'s all about pleasing the fans, and the lengths that these hulking wrestlers go through for their glory is heartbreaking. Marisa Tomei is sympathetic as a single-mom who strips to support her son (and she\'s certainly not shy about her body, which looks great for a 44-year old), and you can really sense the conflict in the feelings she has for Randy - but the rules say that she can\'t see a customer outside of work.

But this movie is all about Mickey Rourke. Portraying a broken man, Rourke is absolutely phenomenal in the role of \"The Ram\". Randy\'s inability to connect with his daughter even though he makes the efforts shows just how much of a mess-up his life has become, and while there is no real plot to the film - we are just observers of events as they unfold - it\'s impossible to take your eyes off the screen, and feel anything but sympathy for the character. The music by Clint Mansell is sparse and guitar-heavy, and helps shine a little extra insight into Randy\'s loneliness and isolation.

The Wrestler is a very well done film, and while it might not be something to watch over and over again, it\'s an absolutely engaging and fascinating look at a sad character at the twilight of his career. Definitely go see this one.