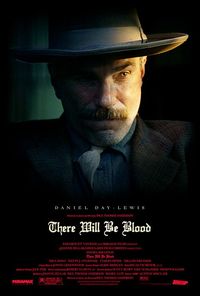 There Will Be Blood

Review: There Will Be Blood

I\'m not really a fan of P.T. Anderson\'s films. I think Boogie Nights is the only one that I enjoyed, and there were certainly parts of Magnolia that were very well done. I just can\'t seem to connect with them on any real level, and they always seem long and drawn out. But if there\'s something that he\'s been able to do really well, in all of the movies he\'s done that I\'ve seen, it\'s his ability to create three-dimensional fascinating characters. His latest film, There Will Be Blood is no exception, and serves as a somewhat lengthy but fascinating showcase for one of the best actors around, Daniel Day-Lewis.

Loosely based on Upton Sinclair\'s novel Oil!, There Will Be Blood tells the story of prospector-turned-oilman Daniel Plainview (Day-Lewis), a morally questionable man whose greed clashes with faith at the turn-of-the-century. When Plainview comes to a small community to drill for oil, he uses his charms to convert most of the town to his line of thinking - everyone except clergyman Eli Sunday (Paul Dano). Sunday is interested in the idea of oil, but when Plainview snubs his offer to say a prayer when the well is activated, his faith in the venture turns south. A relatively godless man, Plainview thinks little of Sunday, whose faith-healing overly-zealous sermons seem to put him in the fringe, but when problems start to surface at the well, affecting Plainview\'s venture (and his family), then a bitter rivalry takes shape. It\'s a long story, with much more nuance and plot than I\'ve just touched upon, but it\'s told in a very realistic manner, and by the end, there will be blood.

Anderson\'s approach to the film initially is a very laid back one, with almost no dialogue for the first 20 minutes or so, as we see Plainview discover his first oil field. It\'s shot very simply, but is exceptionally effective in setting tone and mood. Throughout the film, the viewer is easily transported to the early 20th century, through a very convincing combination of set design, cinematography, sound design, and performances. It\'s easy to see why people are lauding Daniel Day-Lewis for his performance in this film. It\'s more than just a rehash of his character from The Gangs of New York; this character sounds like John Houston but acts Machiavellian, his greed and determination rolling over everyone in his path. It\'s a powerful role, and worth seeing the film for his performance alone. The music, done by Radiohead\'s Jonny Greenwood, is sparse and dissonant. String-based, the music slowly swells and builds tension, used only when needed. It\'s surprisingly fresh and innovative, and fits perfectly with the material on screen.

There Will Be Blood is a long film, but it\'s worth seeing. The acting is great, the production value solid, and unlike the other oil epic Giant, there is no romantic storyline to distract from the raw determination of Plainview\'s desire for the black gold. It\'s definitely one of the better films out there, and absolutely recommended.