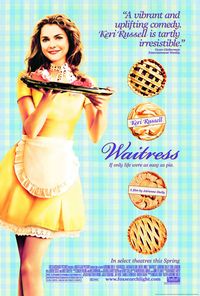 Waitress is a small indie flick (distributed by Fox Searchlight) directed by Adrienne Shelly, a promising writer/director/actress who was tragically murdered by an illegal immigrant. Yes I know that\'s a rather morbid way to start any movie review, but it needed to be stated.

The film is about Jenna (Keri Russell), a waitress in a loveless abusive marriage who finds out that she\'s pregnant. She doesn\'t want to be pregnant - she just wants to make pies, which she does amazingly well. Jenna\'s co-worker gal-pals Becky (Cheryl Hines) and Dawn (Adrienne Shelly) agree to help keep her pregnancy a secret as long as possible, so that Jenna can enter a pie competition, win the money, and get away from her husband Earl (Jeremy Sisto) without him ever finding out about the baby. But when Jenna meets her new doctor (Nathan Fillion), she enters into an affair and things start to get... complicated.

Subplots in the story involve Earl\'s needy-yet-abusive relationship with Jenna, Becky\'s big secret, and Dawn\'s search for true love. The movie has a tone that is hard to describe - it\'s not quite a romantic comedy, but it\'s not quite a drama either. It\'s a little of both - there\'s an underlying sadness to the whole thing, and as Jenna realizes she\'s getting too deep into the relationship with her doctor, and her pregnancy gets harder to hide, things with Earl are going to come to a head. Earl is so needy, in fact, that when he finally does find out about the pregnancy he\'s mad at first, but then makes Jenna promise \"not to love the baby more than me\". Wow, talk about a character you just want to smack!

Since Jenna is a pie genius, it\'s only fitting that we see the pies. And oh, how we see them. Jenna works through her issues by baking, and she comes up with new and inventive pies that are truly mouth-watering. This is one of the few films I\'ve ever seen that made me want to eat afterwards. I had a huge craving for pie afterwards, and while it has still gone unfulfilled, I intend to make the \"I Don\'t Want Earl\'s Baby\" Pie, which is a quiche made with brie and ham. It looked awesome.

The music is by relative newcomer Andrew Hollander, and provides a nice dreamy atmosphere while underscoring the necessary emotional aspects of the film. The \"Pie Theme\" has a fairy tale quality to it, which is very pleasing. The dialogue and performances are good, and it\'s done in such a way that I could honestly see a stage version of this story working quite well. In fact, maybe someone should do that!

Waitress will be a small and limited release, so if you don\'t catch it in theaters, feel free to check it out on DVD.