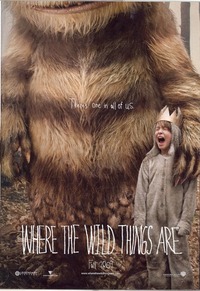 Where The Wild Things Are

Review: Where the Wild Things Are

After many troubled attempts, Maurice Sendak's classic children's book, Where the Wild Things Are, has finally made the leap to the big screen.  The story is about Max (Max Records), a lonely kid with an overactive imagination, who runs away after a fight with his single mom.  He travels by boat across the sea to an island, where he encounters the Wild Things.  Max convinces them he is a king, so they won't eat him, and he eventually bonds with Carol (James Gandolfini), who has a short temper and is upset because K.W. (Lauren Ambrose) keeps leaving the group.  The rest of the Wild Things all have varied personalities, and eventually Max comes up with a plan to have them all build a big fort, so they can live together and sleep in a pile.  But when K.W. brings her old friends into the group, a rift emerges that threatens to tear the whole dynamic apart.

Usually the problem with any film based on a short book - especially one as short as Where the Wild Things Are - is that the film ends up adding a lot more that didn't exist in the original material.  That's fine and good, and in this particular case, they did a great job creating a whole character dynamic between the various Wild Things that didn't really exist in the book.  However, it still felt like it dragged on at times, and had a somewhat meandering pace that made me start to feel restless.

The film does a few things very well.  First and foremost, it effectively captures the innocence and frenetic nature of being a kid, as demonstrated through the snowball fight at the beginning of the movie.  Later on, as Max tries to help the issues with the Wild Things, he starts to see things from a different perspective, gaining maturity with the increased responsibility.  His behavior earlier in the film - when he throws a tantrum and runs away - felt a bit awkward, more like a kid who was in need of some serious therapy, than someone who we should feel sympathy for.

What stands out amazingly in the film is the look of it.  Visually it's a tour-de-force of cinematography, art direction, puppetry and visual effects.  Bringing the Wild Things to life was no easy feat, and I have to commend everyone involved for some truly exceptional work. The music in the film, primarily driven by original songs written by Karen O., was interesting in that they really did speak to Max's state of mind, but as performed by Karen O. and the Kids, I found it to be really grating and annoying, in a sing-songy kind of way that would probably be endearing to kids, but just didn't work for me.  The score by Carter Burwell (along with Karen O.) was more effective, providing some of the necessary emotional material to the story.

Where the Wild Things Are has been heralded as the best film of the year by some people, and others have derided it as too full-of-itself and overly-long to be worth bothering with.  I feel that it falls in the middle - it's a very well done film that effectively captures the frustrating melancholy feelings that a 10-year old might have, but drags on a bit longer than it needs to, and has a few head-scratching moments.  Overall, worth seeing, but not rushing to.