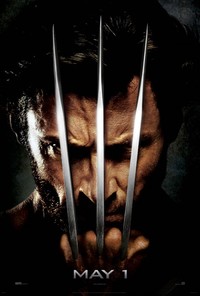 What goes around comes around. After three highly successful feature films, the X-Men franchise decided to look backwards and explore the roots of the characters. The first one up, X-Men Origins: Wolverine, stars Hugh Jackman in his fourth feature film as the self-healing, adamantium claw-bearing mutant. Since we\'re supposed to believe that everything that we see in this "prequel" takes place prior to 2000\'s X-Men, we know where the character has to end up - so we just need to find out where he came from!

As a kid, young James Howlett saw his father killed by the groundskeeper - and in rage, bone claws emerged from his fists - which he used to kill the groundskeeper, who it turns out was his real father. Whew. On the run with his half-brother Victor, the two (now represented by Hugh Jackman and Liev Schreiber) fight various battles through time (apparently they don\'t age, per their mutations), from the civil war, two world wars, and up to Vietnam. It\'s there where, while trying to stop a rape from taking place, Victor kills a superior officer. Both Victor and James are sentenced to death by firing squad…. which they both surivive, of course, since they are pretty much invincible.

Enter William Stryker (Danny Huston), a Major who is putting together an elite team with special powers to handle black ops. Things seem to be going good for a while, with James and Victor and their fellow mutant buddies hacking and slashing their way through various missions, but soon James starts to feel that his brother is filled with a bit too much blood lust, and he leaves the team.

Six years later, James is now known as \'Logan\', and is working with a lumber company in the Canadian Rockies, and living with his girlfriend, Kayla Silverfox (Lynn Collins). He is located by Styker who warns him that members of the old team are being killed, and soon thereafter, Kayla is killed by Victor. Wanting revenge, Logan accepts Styker\'s offer to undergo an experimental fusion of adamantium to his bones. The result: Wolverine! The rest of the movie is spent expanding on Logan\'s hunt for Victor and revenge, as well as Stryker\'s two-faced manipulations of everyone for his own personal ends.

My expectations for Wolverine were low. Really, really low. I hadn\'t heard anything good about it, and so I was pleasantly surprised at how much of it I found enjoyable. That isn\'t to say it\'s a good film, but it certainly felt better than X-Men: The Last Stand, at least to me. It\'s got some fun action sequences, and the basic story holds up decently. The visual effects don\'t seem fully completed (the "youthenization" of Patrick Stewart\'s cameo was painful to look at), and it makes me wonder if they should have worked a little longer on the film before releasing it.

Harry Gregson-Williams\' score works fine for the film, and I found Ryan Reynolds\' portrayal of Wade Wilson to be one of the highlights of the film. Most interestingly, I found that the Logan storyline holds up if you watch X-Men and X2: X-Men United after seeing Wolverine. Sure Brian Cox is great as Stryker, but it all ties together nicely. It\'s an unexpected perk to the film, and while I would still suggest you just wait until home video, I\'d say that Wolverine barely eeks out a 3/5.