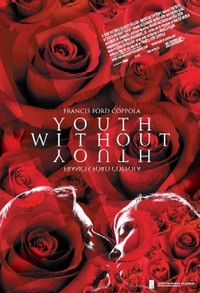 Youth Without Youth is director Francis Ford Coppola\'s first film in ten years, and is based on the novella of the same name by Romanian author Mircea Eliade. The film concerns the fantastical events surrounding 70-year old Dominic Mate (Tim Roth), who gets struck by lightning and then experiences a miraculous rejuvenation, becoming young again and gaining immense intellectual capacity. As he was living in Bucharest in the late 1930s, his phenomenon soon attracts the attention of the Nazis, and with the help of his doctor (Bruno Ganz), they escape to Switzerland where, now looking like a man in his 30s, he begins to research how language and time have molded society. Soon he meets encounters Veronica (Alexandra Maria Lara), who by coincidence has also been struck by lightning, and is now speaking in Sanskrit - apparently channeling the spirit of a woman who was a disciple of a holy man in India hundreds of years before - and Dominic thinks he might have found someone who can help him complete his project by researching back to the dawn of language.

The film is another example of Coppola\'s mastery of the craft of filmmaking - on a technical level, it\'s brilliant, with the use of imagery and sound completely absorbing us and immersing us in the world he creates. Unfortunately, the plot is so high-concept that it just can\'t connect with an audience. For all the dialogue about proto-languages, and philosophical diatribes, we\'re dragged along on a journey that is never boring, always fascinating to observe, but ultimately head-scratching and - in the end - pointless. Editor Walter Murch does an exemplary job pulling the pieces together, no small feat considering what he had to work with, and it definitely has a great flow. The music, composed by Argentinian composer Osvaldo Golijov, works well, providing a lyrical flow to the film that works well with the dream-like montage sequences; segments that Coppola does very well.

It\'s hard to recommend the film, only because it seems so messy in hindsight. The story isn\'t confusing, but the dialogue and ideas behind it seem a bit all over the place. It\'s one of those beautiful art pieces that tries to feel more intellectual than it is, and in the process, it ends up confusing instead of entertaining.