Lakeshore Records to Release 'The Wizard of Lies' Soundtrack 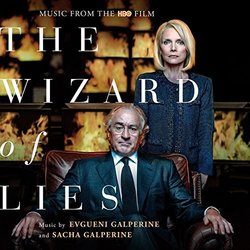 Lakeshore Records will release The Wizard of Lies - Original HBO Films Soundtrack digitally on May 19, 2017. The album features the original score by composers Evgueni Galperine and Sacha Galperine (Nine Lives, The Family).

Debuting in May, HBO Films' The Wizard of Lies, examines Bernie Madoff's Ponzi scheme – his deception, lies and cover-up, all as the financier's wife and sons are catapulted into a harsh and unrelenting spotlight. A modern take on a scheme that dates back to the 1920's called for a score that blends both modern and classic elements to tell this tragic tale of what led to a scheme toppling and the subsequent aftermath. Director Barry Levinson turned to the writing duo of Evgueni and Sacha Galperine – who themselves blend modern and traditional musical methods and training.

"Our goal with this score was to find the right musical color palette that would match this extraordinary character and the incomprehensible path he chose, taking the people around him—his clients as, well as his own family—on a descent into hell," said Sacha.

"A major source of inspiration for us was the symbol of the Ponzi Scheme," added Evgueni. "The cold mathematical pattern of it, the spiral that was set to get bigger and bigger beyond imagination until breaking inevitably into pieces. We tried to translate this mechanical fate into music, with all its strangeness, its suffocation, its absence of humanity."