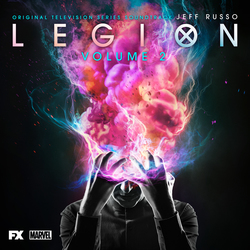 "So glad to be releasing volume 2 of the season one score. There were a number of cues that we just couldn't let out of the bag until after we aired," explained Russo. "'Fauxlero' was so much fun to put together and when was the last time you heard a harpsichord cue?"

"When I first started working on Legion, the showrunner Noah Hawley gave me some great feedback regarding the tonal palate, he suggested I read neurologist Oliver Sacks Hallucinations," said Russo. "It was a fascinating read and it really did help inspire. It is all about the way that our mind can change our perception of reality and what that says about our brains. It was something that directed me right to where this amazing show was going."