Hollywood Bowl to Host 'Raiders of the Lost Ark' - In Concert 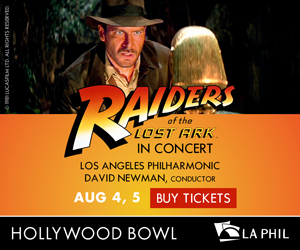 On Friday August 4 & Saturday 5, 2017, Raiders of the Lost Ark - In Concert will have its premiere at the Hollywood Bowl. Oscar nominee David Newman will be conducting the Los Angeles Philharmonic for a performance of the film's original music composed by Academy Award winner John Williams while the film is shown in HD on the Bowl's big screen. Williams received an Academy Award nomination for his score for Steven Spielberg's 1981 classic action adventure movie starring Harrison Ford.

Click here for more information and to buy tickets.