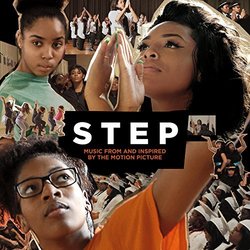 Columbia Records announces the release of the soundtrack to the Sundance sensation Step. Step is directed by Amanda Lipitz and acquired by Fox Searchlight Pictures.

The Step soundtrack was executive produced by award winning artist and producer Raphael Saadiq. The album features "Worth It" by Fifth Harmony, the moving track "Jump" by Cynthia Erivo, written especially for the film by Raphael Saadiq, Taura Stinson, and Laura Karpman, and "Bank Rolls" by Baltimore's own Tate Kobang.

The music is expertly weaved throughout the film to evoke emotion, vulnerability, and optimism from one of the summer's most important documentaries. "When I saw Step, I was immediately moved and inspired. Their stories of hard work and overcoming life's challenges made it clear these young ladies will persevere. I was honored to write music and accompany them on the journey." - Raphael Saadiq