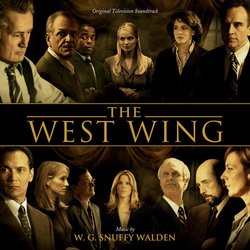 The next release in Varese Sarabande's WE HEAR YOU series will be The West Wing, a masterwork in composition from beloved composer W.G. Snuffy Walden - available directly from Varčse Sarabande on October 6, 2016.

"As I turned the pages of that first script, the rich characters and informative stories captivated me" said Walden in describing his first reaction to The West Wing. "I was convinced: this would be an opportunity that was very rare in network television. As the project got deeper into production, it became obvious that this was exceptional work and I was blessed to be a part of the experience."

"With our schedule and its breakneck speed, we hardly had time to give a second thought to what we were creating, but I knew it was magical," Walden explained. "I wasn't able to appreciate the artistry of the collective achievement in the moment, but I could feel its magnitude in the response from the devotees who watched it religiously every week!"

For seven years, Walden's theme for The West Wing was as presidential as "Hail to the Chief." The theme became "a piece of music that everybody identified with," Walden says. "It was magical how people felt proud to be an American when they hear that music. I don't know how else to say it. I've just been told over and over and over again through the years by people who've been so moved by that."