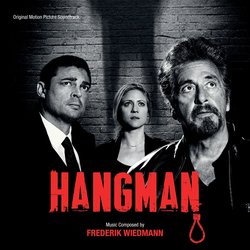 "When I read the script I immediately had a sense of what this film will have to feel like," Wiedmann described. Rather than gearing towards more traditional horror tropes, "we made the determination that we have a much stronger emotional component – a rather tragic backstory of our two detectives - that the score couldn't ignore."

In addition to a standard orchestral palette, "I did however use fair amount of solo cello, haunting solo vocals (by Ayana Haviv), and a heavy set of sound design/electronic elements, for a more modern sound," Wiedmann explained. He wrote themes for the characters, including one especially for The Hangman. "Our detectives chase a serial killer that works in a specific pattern - making it impossible for the detectives to be a step ahead of him. Every time they see him at the crime scene, he smiles and gets away. I tried to create something musically that underlines his smirk, his superiority. We ended up with a live-recorded soundbite of me laughing (kind of a mad laugh if you will), which we then distorted heavily and added other creepy elements to. This way, The Hangman was literally 'laughing' at the detectives inability to catch him."