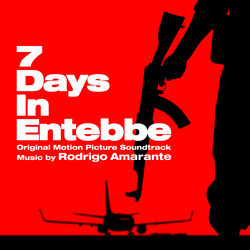 A shocking act of terrorism leads to one of the most daring hostage rescue missions ever attempted in 7 Days in Entebbe, a riveting thriller inspired by true events. In the summer of 1976, an Air France jet traveling from Tel Aviv to Paris is hijacked in midair by two Palestinians and two left-wing German radicals. When the plane is diverted to an abandoned terminal at Entebbe Airport in Uganda, the terrified passengers become bargaining chips in a deadly political standoff. As the likelihood of finding a diplomatic solution fades, the Israeli government sets in motion an extraordinary plan to free the hostages before time runs out. Combining vivid historical details with pulse-quickening suspense, 7 Days in Entebbe is a powerful depiction of an international crisis that stunned the world.

7 Days in Entebbe is Amarante's first film score. In his words:

"There are two aspects of this story that I found useful to reflect in the score: one is that politics, no matter the scale nor the morals, is a tribal affair and as such it is filled with conspiracy and biased perspectives, prone to one sided views of the outside, especially of one's enemy. For that effect I used more rhythm than melody mixing 70s German Experimental music sounds and feel with Middle Eastern and African flavors.

"The other aspect is the tragedy of lack of dialogue and consequent lack of perspective between opposing sides but most importantly, the lack of opinions expressed or accepted within each of these sides which is what leads to it. To hint at that sense of consensus, or narrow focus, I had the orchestra play a cyclical and stern melody in unison (that is when all instruments play the same notes without any harmony added), in the low register which makes for a grave hum that seems to leave a lot of space around it but suffocates any attempt of dissonance with its concentration of power; it accepts only consonant additions, it represents a unilateral voice. As tragedy becomes imminent, voices start to untangle from the unison mass and emerge; the orchestra unfolds as harmonies and dissonances sing out of it."