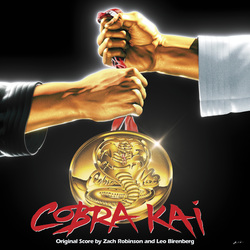 La-La Land Records is proud to announce the release of the Cobra Kai CD soundtrack on May 22, 2018 at www.lalalandrecords.com, followed by a general retail release June 1, 2018 and on LP later this year. The hit YouTube Red series, produced by Overbrook Entertainment in association with Sony Pictures Television, debuted on May 2 and stars Ralph Macchio and William Zabka reprising their roles from the original 1984 feature film The Karate Kid. As a special exclusive, 300 units of the CD will be available packaged in a 1980's-style replica longbox, via the label's website (www.lalalandrecords.com), as a tribute to The Karate Kid Saga's origins. The album features the original score by composers Leo Birenberg and Zach Robinson, with the CD release featuring several exclusive, CD-only tracks.

"For Cobra Kai, we created three unique score worlds that each support a different story being told on the show," said Birenberg. "We like to say Johnny's music is the representation of how he hears himself: as the ultimate badass, scored with face-melting guitar riffs and bruising arena drums. Daniel La Russo's theme is supported by more orchestral, Japanese-influenced sounds and his tonal palette our through line that connects us to the earlier films and Bill Conti's legendary score."

In the highly-anticipated return of two iconic characters, the arch-rivals from the legendary Karate Kid film series reunite over 30 years after the events of the 1984 All Valley Karate Tournament. Now living in the affluent hills of Encino, Daniel LaRusso (Macchio) leads an enviable life with his beautiful family, while running a successful string of car dealerships throughout the valley. Meanwhile, his high school adversary, Johnny Lawrence (Zabka), whose life has taken a rocky turn, seeks redemption by reopening the infamous Cobra Kai karate dojo. Their lives inevitably become intertwined and the rivalry is reignited, setting forth the next generation of "karate kids."

Composer Zach Robinson explained, "We have the new Cobra Kai students, who are scored with a blend of hard rock (inherited from Johnny), '80s inspired synthwave, and modern EDM. Part of the fun of having established these musical identities was when we got to mix and match them based on the interactions happening between the ever-twisting story arcs of the characters."