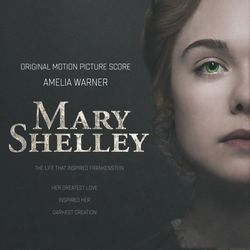 Universal Music Classics/Decca Gold announced today, the release of the score to the highly anticipated biopic from IFC Films, Mary Shelley, which features original music by composer Amelia Warner (Mum's List). Mary Shelley will be released digitally on May 25th – the same date the film premieres in theaters in the US. In describing the composition process, Amelia emphasized the ghostly themes of the film by utilizing vocalists and orchestral rhythms to assist in telling this illuminating tale.

"We used a lot of synths layered with the orchestra. The real strings layered with electric synths created a strangeness and modernity that I think works well with Mary's character. We found some amazing musicians and two incredible singers who are a huge part of the score. We used a soprano and a counter tenor and had them sing in a very expressive way. For example, when things start to go a bit crazy in those Geneva scenes, we got the singers to scream and to slide up and down the scale to create an unsettling disorientation. It was a difficult cue and took a while to get right. Voice was really important as were the strings, which are slightly discordant. We also used breath and heartbeat to feel like we are experiencing it as Mary."