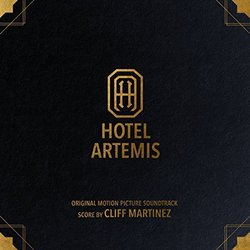 "I love being asked to get the band back together again. Especially when the band is the team that released one of my career defining scores - Drive.," said Martinez. "Am glad to have gotten the call from Adam Siegel for Hotel Artemis and that Lakeshore will be releasing the soundtrack. And we've struck creative gold again with Hotel Artemis. For best results, sit motionless between two speakers for the entire duration of the recording and bask in the uplifting and explulsive electronic mayhem."