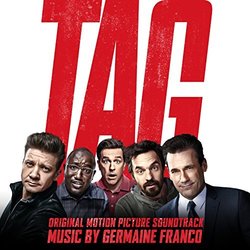 Lakeshore Records announced today the upcoming release of the soundtrack to New Line Cinema's summer comedy, Tag, which features an original score written and produced by composer Germaine Franco (Coco). The album will be released digitally on June 15th – the same date the film premieres in theaters in the US.

"Scoring Tag was a collaborative and exciting experience," says Franco. "When I first saw the film, I couldn't stop laughing. I loved what Jeff Tosmic had done with the film. Working with him was a very synergistic experience. Jeff had specific ideas about the themes for the film. He wanted to build a theme that had elements of a caper theme that could also be transformed into a friendship theme. In addition, we created a mission theme, to show how much the characters were quite serious about the game of tag. I truly enjoyed working with Erin Scully and Kim Baum from New Line Cinema. Their creative vision guided the direction of the score as well."