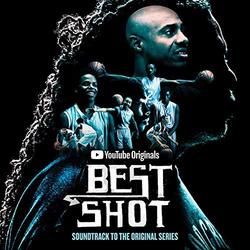 The music for the series was created by the composing duo Hylton & Yoffee who have collectively racked up Billboard #1 albums with Nicki Minaj, Arianna Grande, and Keyshia Cole, and composed music for the campaigns of Star Wars: The Force Awakens, Star Wars: The Last Jedi, Ready Player One, Pirates of the Caribbean, The Jungle Book, among others. Yoffee currently scores the #1 show on Disney, Andi Mack, and has scored television series for MTV, the CW, Showtime and Netflix.

The resulting soundtrack for Best Shot is a hybrid of hip-hop & film music, created by utilizing the songwriting camp process familiar in the pop world mixed with traditional scoring techniques. "The look into the lives of these young men from Newark Central has been an amazing canvas for music because of the depth of emotion portrayed on screen," explained the composing duo. "We approached the original music in much the same way we create songs for record labels & pop artists but instead we treated the show as the artist and developed songs in the same way we would develop an album."

Singers, rappers and a bevy of musicians were recorded for the show's music, which features 20 powerhouse tracks culled from the show's original score – including ten original songs. Three songs feature one of Interscope's newest artists, Mereba, and three feature vocalist Scotty Grand who has been the creative director for Jordin Sparks, JoJo and Keke Palmer. "There was also a desire to harken back to the musical history of Newark," described Hylton and Yoffee. "So we called on jazz legend Gary Thomas, who has toured with the likes of Miles Davis, Herbie Hancock and John McLaughlin; and Russell Kirk who has performed with Parliament Funkadelic, Sam Rivers, Terri Lynne Carrington and Jill Scott. We were able to write extremely detailed pieces because we knew exactly who would be performing them and were familiar with their particular strengths."