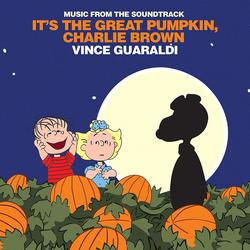 One of the most sought-after soundtracks in the beloved collection of music from the iconic Peanuts animated TV specials, It's The Great Pumpkin, Charlie Brown is being made available for the first time ever on Friday, October 5 via Craft Recordings. Featuring music by Grammy-winning composer/performer Vince Guaraldi, the CD package includes a new introduction from the TV show's executive producer Lee Mendelson and insightful liner notes by Derrick Bang, Peanuts historian and author of Vince Guaraldi at the Piano.

It's The Great Pumpkin, Charlie Brown (Music from the Soundtrack features some of the most iconic tracks in pop culture, including the instantly recognizable "Linus and Lucy," as well as the languid, lyrical "Great Pumpkin Waltz." The music was recorded on October 4, 1966 at Desilu's Gower Street Studio in Hollywood, California by Guaraldi (piano) and his longtime friends and trio sidemen - bassist Monty Budwig and drummer Colin Bailey - joined by Emanuel Klein (trumpet), John Gray (guitar) and Ronald Lang (woodwinds). The entire scoring process was overseen by composer, arranger and conductor John Scott Trotter, well-known for a three-decade run as Bing Crosby's music director and close friend.

"This is the quintessential Vince Guaraldi for our Peanuts' specials...some of his best atmospheric jazz," Mendelson shares. "Vince's score carries the gang with the autumn leaves, through the scary and cold Halloween night. This music comforts the indomitable faith of Linus, still waiting for his hero since 1966 - forever in our ears, hearts and memories."

"Guaraldi had a strong sense of how music could - and should - be employed to maximize the viewing audience's emotional response," writes Bang. "[He] emphatically established the Peanuts 'musical personality' with this third outing, and all subsequent prime-time specials owed much to the groovin' atmosphere that is so prevalent in Great Pumpkin. Guaraldi had a gig for life...and his legacy lives on, expand[ing] by the year, thanks in great part to the jazz swagger given to an insecure blockhead and his lovably crazy beagle."