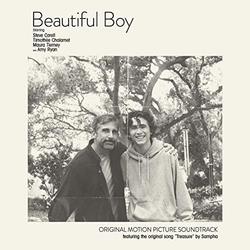 The original motion picture soundtrack for Beautiful Boy was released today by Warner Bros. Records. The film opens in theaters today from Amazon Studios in New York and Los Angeles, and expanding further the following weeks.

Beautiful Boy is a deeply moving portrait of a family's unwavering love and commitment to each other in the face of their son's addiction and his attempts at recovery. It is based on two memoirs, one from acclaimed journalist David Sheff and the other from his son, Nic Sheff. As Nic repeatedly relapses, the Sheffs are faced with the harsh reality that addiction is a disease that does not discriminate and can hit any family at any time.

The soundtrack includes "Treasure," an exclusive new song from acclaimed UK artist Sampha. The track, which plays over the end credits, is the first new music from Sampha since his February 2017 debut album, Process (Young Turks), which won the Mercury Prize. He wrote and produced "Treasure" himself, recording it in London in August 2018.

"I wrote 'Treasure' after seeing the film for the first time," explains Sampha, who has previously lent his vocal, production and songwriting talents to a whole range of standout releases, from UK contemporaries such as SBTRKT, FKA twigs, Lil Silva and Jessie Ware to world-renowned superstars like Beyoncé, Kanye West, Frank Ocean, Solange and Drake. "Nic and David's story, and the dynamic between them, really resonated with me on an emotional level and 'Treasure' is my response, filtered through the lens of my own experiences. I feel honoured to be asked to contribute something to a film as authentic and important as this."

In addition to "Treasure," the soundtrack features an extraordinary selection of songs that reflect the vastly different worlds of the father and son - from John Lennon's "Beautiful Boy (Darling Boy)," David Bowie's "Sound and Vision" and Tim Buckley's "Song To The Siren (Take 7)" to Massive Attack's "Protection," Nirvana's "Territorial Pissings" and Aphex Twin's "Nanou2."

"The music the filmmakers have chosen to be included in the film very accurately represents the soundtrack of our lives at the time," said David and Nic Sheff. "We are so thankful to everyone involved, including Sampha and the amazing song he wrote for the film. Music was an essential part of our emotional journey, so it's wonderful to hear it interwoven in the movie in a way that feels completely authentic. It's another reason we're grateful to have our family's story made into this wonderful film."