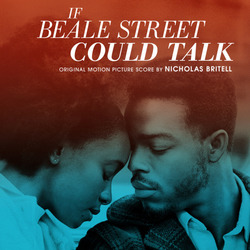 Lakeshore Records will release If Beale Street Could Talk—Original Motion Picture Soundtrack composed by Nicholas Britell worldwide digitally on November 9 with a vinyl version forthcoming. It's Britell's second collaboration with writer/director Barry Jenkins and the follow up to his Academy Award-nominated score for Moonlight—the Best Picture Oscar winner directed by Jenkins in 2016 (who took home the Best Writing Adapted Screenplay Oscar). Britell brings his limitless creativity to the themes of love and injustice anchoring the film and creates a score sublimely straddling the worlds of classical and jazz. The sound ranges from lush to uncompromisingly experimental thoroughly inhabiting the film to striking and unforgettable effect. Annapurna Pictures will release the film which stars KiKi Layne, Stephan James, Teyonah Parris, Colman Domingo and Regina King, in select theaters November 30.

Set in early-1970s Harlem, If Beale Street Could Talk is a timeless and moving love story of both a couple's unbreakable bond and the African-American family's empowering embrace, as told through the eyes of 19-year-old Tish Rivers (screen newcomer KiKi Layne). A daughter and wife-to-be, Tish vividly recalls the passion, respect and trust that have connected she and her artist fiancé Alonzo Hunt, who goes by the nickname Fonny (Stephan James). Friends since childhood, the devoted couple dream of a future together but their plans are derailed when Fonny is arrested for a crime he did not commit.

Says Britell: "It was a truly special experience to collaborate with Barry on If Beale Street Could Talk. Together, we explored a sonic landscape filled with brass and strings, while also venturing into some quite extreme experimentation. I'm always fascinated by the mysteries of scoring a film. As Barry and I worked together, we discovered certain sounds which we felt deeply resonated with the story. I'm so honored to have been a part of this film and to have had the opportunity to work with Barry again."

Says Jenkins: "Working with Nick on the score for If Beale Street Could Talk was a wonderful continuation of the process we began on Moonlight. In channeling the voices of James Baldwin, our main character Tish and the rich array of souls she encounters and the moods and themes she charts, we arrived at a sound that I feel truly honors the wonderful text that Baldwin gifted us while creating a distinct soundscape for this literary adaptation."