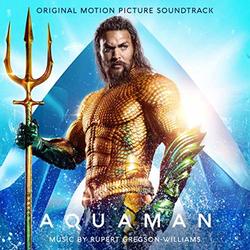 WaterTower Music is excited to announce today's release of the soundtrack to Aquaman, the action-packed adventure film from director James Wan that spans the vast, visually breathtaking underwater world of the seven seas. The soundtrack is now available, and the film is in theaters on December 21. Aquaman features an original score by multi-award-winning composer Rupert Gregson-Williams (Wonder Woman, Hotel Rwanda, Hacksaw Ridge), includes a track by composer Joseph Bishara (The Conjuring, Annabelle) and debuts the new songs "Ocean To Ocean" by Pitbull Feat. Rhea, and the end title song "Everything I Need" by Skylar Grey.

To bring the film's themes to life musically, Aquaman director James Wan turned to composer Rupert Gregson-Williams, who says, "Writing the themes for the different characters was awesome. Arthur Curry has such a strong character—he's a real rock star—so I felt he deserved a big melody. He gets to rock out for certain intense moments too. Orm is Atlantean, and the score I wrote for Atlantis is in big contrast to the score for the surface world, epic and glorious. Black Manta inspired a more industrial, electronic feel. And, of course, there's romance—two in fact. Atlantis and the entire world James created is truly amazing, giving me such a rich opportunity."

"James Wan has given me such a rare opportunity and I am so unbelievably grateful," explains Skylar Grey. "James, score composer Rupert Gregson-Williams, as well as every person behind the scenes on this project has been a dream to work with...a team of extremely respectful and professional people who I'm now honored to call friends. 'Everything I Need,' written by myself and my fiancé, Elliott Taylor, was inspired by the forbidden love story that is threaded throughout the movie, and we are very passionate about this song."

"The ocean, the sea and any body of water, to me, is true freedom," said Armando Christian Perez (Pitbull), who was inspired by the film's settings and themes, and especially by Aquaman's struggle between his two worlds—the surface and the sea. "The ocean has always been the border from where my parents came from Cuba and the United States, which gives us freedom. That's why I respect water. Bottom line: water gives us freedom."