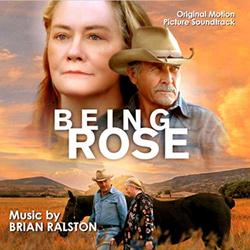 Film Composer Brian Ralston has announced the digital release of his original soundtrack for the new film Being Rose; a physical release is forthcoming. The western-inspired soundtrack will be released through NoteforNote Music and coincides with the film's premiere earlier this month.

The dramatic love story, written and directed by Rod McCall, stars Cybill Shepherd, James Brolin and Pam Grier. Being Rose follows the story of a widowed ex-cop (Shepherd) who discovers that she may have a life threatening illness and decides to go on a solo road trip in a motorized wheelchair. On her journey, Rose meets and falls in love with a charming cowboy, Max (Brolin), who has to come to a crossroads of his own. Rose soon discovers more than just the simple beauty of New Mexico.

The Being Rose soundtrack features 21 tracks of arrangements influenced by New Mexico's culture. The compelling album, recorded in Los Angeles by some of Hollywood's best AFM studio musicians, companions Rose's journey through the Southwest and beautifully conveys her poignant spirit and determined drive to find what's amiss before she goes. The array of different musical instruments, including native winds and flutes, violin, guitar, drums, piano, and synth create a rootsy Americana backdrop to McCall's picturesque plot.