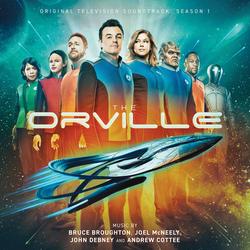 La-La Land Records has announced the upcoming release of the Season One soundtrack of FOX's The Orville – created by Emmy Award-winning actor and writer Seth MacFarlane. The series has been a hit with audiences since its debut and this will mark the first time that the soundtrack is getting its own release. Academy Award-nominated and Emmy Award-winning composers Bruce Broughton, Joel McNeely, John Debney and Andrew Cottee used a 75-piece orchestra to create a classic and beautiful score that will be released on a two-disc CD set on Tuesday, Jan. 22, followed by a digital download from Fox Music on Friday, Jan. 25. Season Two of The Orville airs Thursdays (9:00-10:00 PM ET/PT) on FOX

"La-La Land Records is deeply honored to be releasing the astounding orchestral score to The Orville," says La-La Land Records executive producer Matt Verboys. "Steeped in classic film scoring motifs, with exciting contemporary flourishes all its own, these episode scores demonstrate unequivocally how exceptional television music can be, and how high it can aspire."