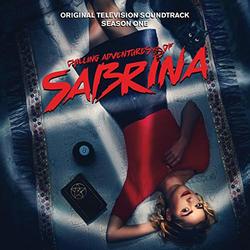 WaterTower Music has announced today's release of Chilling Adventures of Sabrina: Season One (Original Television Soundtrack), the 19-song collection that includes music from both Part One and Part Two of the Netflix series that re-imagines the origin and adventures of Sabrina the Teenage Witch as a dark coming-of-age story that traffics in horror, the occult and witchcraft. The album will be available for streaming and purchase digitally on April 5, coinciding with new episodes of the show (Season One, Part Two) which launch the same day on Netflix. The Soundtrack features the theme from the show, "Main Title (Chilling Adventures of Sabrina)" by composer Adam Taylor, six performances from the cast, along with a wide range of songs that are featured in the show.

"Like the show itself, the songs of Chilling Adventures of Sabrina are current, vintage, cutting edge and familiar (with a twist), and these elements create the musical character for the show," explains Alexandra Patsavas, who assembled the music in the show and produced the soundtrack. "Creator Roberto Aguirre-Sacassa always had a very specific musical signature in mind for the series - we discussed it before the pilot was shot and edited. Archival tracks like 'Bad Moon Rising' by Creedence Clearwater Revival, Devo's 'Girl U Want,' and The Cramps' 'New Kind Of Kick' are interwoven with beautiful, often darker reworkings of beloved standards like Sylvia Gordon's 'I Put A Spell On You' and The Stray Cats' 'Sixteen Candles.' In addition, brand new artists like Valerie Broussard, Peter Matthew Bauer and Beck Pete are showcased. Finally, and perhaps the most 'Sabrina' of all (and part of Roberto's vision for the musical character if you will), are the original cast recordings produced by Leonard Jay Jackson. These six extraordinary tracks, performed by cast members including Kiernan Shipka, Ross Lynch, Lucy Davis, Miranda Otto, Jaz Sinclair, Tati Gabrielle, Adeline Rudolph, Abigail Cowen, Gavin Leatherwood, and Alvina August are interwoven through the show and soundtrack."

The Chilling Adventures of Sabrina: Season 1 (Original Television Soundtrack) digital album is available today; and a vinyl version of the album will be released soon.