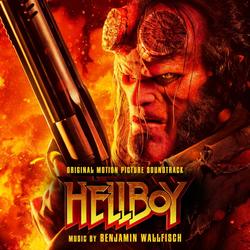 Of the soundtrack, composer Benjamin Wallfisch says: "I'm thrilled to be collaborating with Sony Music on the release of the Hellboy soundtrack album. Mike Mignola, Neil Marshall and the entire creative team have created an incredible next chapter in this iconic franchise, one that demanded a completely new approach to the score. Sony Music couldn't be a better partner to bring this music to a wide audience and I'm grateful to them, Lionsgate and Millennium Media."