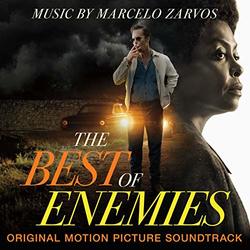 Of the soundtrack, composer Marcelo Zarvos says: "The score of The Best of Enemies utilizes a lot of guitar and different types of plucked string instruments found in the American South like dulcimer, mandolin along with piano, voice, orchestral and solo cello. The film deals with the racial tension of early 1970's North Carolina and with characters finding the common humanity on both sides of the racial divide. The music balances the grueling realities of the time period with a message of redemption."