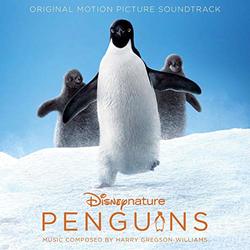 Adds producer Roy Conli, "Harry is an amazing artist. The spirit of the music in this film is flawless. It carried a significant weight and helps drive our story."

The score was recorded at the legendary Abbey Road Studios, utilizing a large orchestra and a choir. Says Gregson-Williams, "It has a wide range of emotions—from mischievous and humorous for the young and rather clumsy Steve when we meet him, to epic and awe-inspiring to reflect the extraordinary landscape and environment that these penguins live in."

The composer created individualized thematic material for Steve, Adeline, the chicks and predators like the leopard seals. Additional themes represent the changing of the seasons as well as a central theme for the penguins as a whole. "The music in a Disneynature film can be critical–just as it might be in a mainstream feature, but perhaps more so in this instance," says Gregson-Williams. "Given the fact that the story is told via a single voice, the narrator, the music has to play a large part in setting the tone."