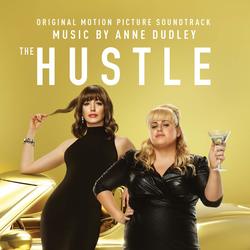 "The Hustle is based on one of my favorite films Dirty Rotten Scoundrels and, in a nod to this, my score takes as its starting point the music of The Hot Club of France," says composer Anne Dudley of the soundtrack. "I've always found this sound both irrepressibly happy and somehow a bit louche. The driving energy of the guitar rhythms coupled with some sophisticated harmonies represent the contrasting characters of Penny (Rebel Wilson) and Josephine (Anne Hathaway), without the score having to be overbearingly 'comic.'

It was a particular delight to work with some of my favorite musicians – especially John Parricelli on guitar, Chris Garrick on violin and Eddie Hession on accordion. It was also a pleasure to work with Chris Addison, the director who was full of good cheer, and musically incredibly literate."

In the hilarious new comedy The Hustle, Anne Hathaway and Rebel Wilson star as female scam artists, one low rent and the other high class, who team up to take down the dirty rotten men who have wronged them.