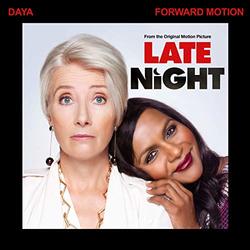 "I'm excited to be collaborating with such cool and inspiring females who are all pushing boundaries in their respective fields," Daya says of the project, which marks the first time she has had a song featured in an original motion picture. "'Forward Motion' is the perfect soundtrack to celebrate these females and others like them and I'm honored Diane decided to give me a chance on this."

"I am proud to be a part of Mindy Kaling's amazing film, Late Night, from director Nisha Ganatra," Warren says. "I am excited about the song I wrote for the movie, 'Forward Motion,' sung by the talented artist Daya. I can't wait for people to hear this song and see this movie."

"It would be exciting enough that the legendary Diane Warren wrote a song for my movie Late Night," Kaling says of the track. "The fact that it is a total banger is even more wonderful."

Amazon Studios acquired 52754 at the Sundance Film Festival earlier this year, and had its Los Angeles premiere last night at The Orpheum Theater, with Kaling, Warren and Ganatra all in attendance.

After almost 30 years, a groundbreaking talk-show host suspects she may soon be losing her coveted seat on late-night television unless she manages a game-changing transformation in Late Night, the first feature film from Emmy-nominated writer and producer Mindy Kaling.