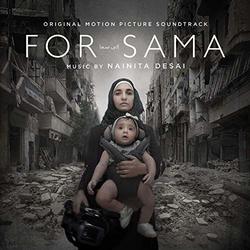 Milan Records is honored to announce the soundtrack to the motion picture film For Sama by Nainita Desai, which released today alongside the film. The documentary is an intimate and epic journey into the female experience of war. The story of Waad al-Kateab's life through five years of the uprising in Aleppo, Syria as she falls in love, gets married and gives birth to Sama, all while conflict rises around her. The soundtrack is now available and can be purchased through Milan Records.

"For Sama is certainly one of the most unique and important films I have ever been involved in", says Nainita Desai. "Working with the two directors Ed Watts, and Waad Al-Kateab, who filmed, produced, and lived through the uprising, I felt this extraordinary responsibility to do the film and Waad's life story justice, to tell the story through music in the most true and authentic way possible. Being involved in the edit for 18 months writing from a very early stage, I wrote a huge amount of music with a sound palette encompassing electronics, sound design, and orchestral elements with a touch of ethnicity. I must have watched the harrowing scenes thousands of times, and still find it incredibly emotional to watch; the footage has an incredible force, emotion and humanity to it that transcends all barriers."