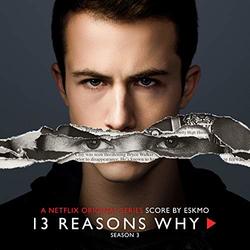 Paramount Music has released the original television score soundtrack from 13 Reasons Why (Season 3), featuring music by ESKMO, today. The riveting 16-track album is now available for purchase and streaming on all digital platforms.

"Season 3 turned into a captivating thriller. The kids and parents have been through so much. The vilest character in the show has turned up dead. It's a continuation of the moods and themes we have felt leading up to here and there are moments to turn the themes into dark and murky explorations. I went deeper into the paranoia while wanting to balance the heart of it all. Ultimately, it's still a story about love, loss and becoming adults. I turned some of our main themes of Clay, Hannah and the surrounding characters into shadow versions of them. I also turned some of the previous shadow type of sounds into warmer more soothing places. There are some lovely long moments for the music to stand out and help the scene and I relished those spots." – ESKMO