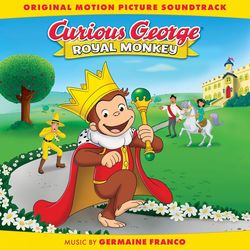 Back Lot Music will release the Original Motion Picture Soundtrack to Universal 1440 Entertainment's Curious George: Royal Monkey on all digital and streaming platforms on September 6th. The album will feature an original score by Germaine Franco (Dora and the Lost City of Gold, Little, Tag), along with a brand-new original song written, performed, and produced by multi-platinum artist Andy Grammer, as well as 4 other original songs written by Michele Brourman and Amanda McBroom. Curious George makes his royal debut in the new feature-length animated movie, arriving on Digital, DVD and streaming on Hulu on September 10th from Universal 1440 Entertainment, the original content production arm of Universal Pictures Home Entertainment, and Imagine Entertainment.

Curious George: Royal Monkey is the first film in the Curious George franchise to be comprised of a predominantly female music team, with Germaine Franco, the first female composer, and Michele Brourman and Amanda McBoom, the first female songwriters. The whimsical and joyous soundtrack transports the listener between George's world and the royal kingdom of Simiana.

Given that Curious George is such a remarkable figure in the world of children's literature, Franco was honored to take on the task of scoring the film. She detailed her process of developing the score: "I was asked to create a whimsical world of music from George's point of view. The story involves a case of mistaken identity between George and the Simiana royal monkey, Phillipe. I wrote distinct themes for each monkey. George's theme has a signature sound of plucked stringed instruments, while Phillipe's theme involves muted trumpets and snare drums, as if it were written for a toy solider. The score alternates between lively rhythm instruments with hand percussion to denote a Caribbean influence from the island of Simiana, mixed with chamber and orchestral instruments to establish a royal sound. I truly enjoyed collaborating with the Universal 1440 Entertainment team to write the score for the newest installment of the iconic family franchise." –Composer, Germaine Franco

Songwriting-duo Amanda McBroom and Michele Brourman contributed 4 of the 5 original songs featured on the soundtrack: "We've written songs for baby dinosaurs, lunatic poodles, noble wolf-dogs, mythic heroes, and chipmunks - but George is our first monkey! We are thrilled to be a part of George's first female music team! In Curious George: Royal Monkey, we used songs to drive the action, and to express and heighten emotions during key moments. It was important to us to write songs that we felt could stand alone. We wanted to create tunes that we knew people could enjoy, dance, and sing to. Although we love them all, our favorite song is "Now You Know," which is played during an exciting horse racing scene. It's so joyous and really builds the action in the film." –Songwriters, Amanda McBroom and Michele Brourman