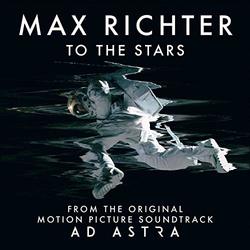 Acclaimed composer Max Richter embarks on a journey 'To The Stars' as he unveils his first single from the forthcoming soundtrack to Brad Pitt's eagerly-anticipated new movie, Ad Astra. The track is released on Friday 20th September via Deutsche Grammophon, to coincide with the film's release in cinemas the same day.

A sci-fi thriller set in the future, Ad Astra stars Brad Pitt as an elite astronaut who travels to the outer edges of the solar system to find his missing father and unravel a mystery that threatens the survival of our planet. His journey will uncover secrets that challenge the nature of human existence and our place in the cosmos.

Max Richter's ambitious score, informed by detailed conversations with Brad Pitt and the film's director James Gray, brings together strings, electronics and vocals to create an epic soundscape that underpins the emotional power and scale of the movie. He first began writing the music to Ad Astra almost two years ago, in the initial phase of the film's production.

"I first saw a rough-cut of the film in early 2018 and was immediately intrigued," Richter recalls. "I knew I wanted to be part of the world James was inventing in Ad Astra. After James, Brad and I had discussed some initial thoughts, I began by making sketches away from the picture, exploring the themes and psychology of this material in musical terms. These ideas evolved through a collective process of experimentation. James has excellent musical taste, and a refined sense of how sonic and visual objects can inform one another. He's also fascinated by the expressive possibilities of experimental music production, so was an ideal fellow traveller on this musical voyage of discovery."

The composer was inspired by the NASA Voyager probes that left Earth in the 70s, destined for the outer planets – a journey similar to that of Brad Pitt's character in the film. He incorporated sounds transmitted from Voyager 1 and 2 into the fabric of his music.

Max Richter explains: "This 'location recording' approach allowed me to use actual material recorded at the sites depicted in the story: when Brad is travelling past Saturn or Jupiter for example, we can actually hear music made from the data the Voyager probes transmitted from that site. The music thus illuminates the story in two ways at once: it illustrates what's happening in the story a traditional film score way, but it also documents the journey in an entirely new way, by incorporating actual material gathered on the trip."

Complementing the extended post-production process of the film, Max Richter created two iterations of his Ad Astra score. The first material, derived from the Voyager data, was written in early 2018 and recorded in January 2019 at AIR Studios in London, while the second recording took place in the summer of 2019. The key components of Max's score are created through the use of strings and electronics, with added warmth from a female chorus. Together these elements intertwine with the striking visuals of the movie to create "a stunning kind of symphony" (Vanity Fair).

Richter concludes: "This film has been a major endeavour. It's a heartfelt project from both Brad and James - who poured everything into it - and meticulously chipped away at the story over years till they were happy. I have nothing but admiration for this dedication."