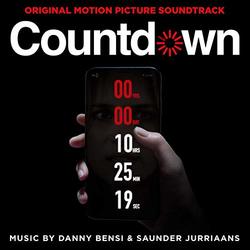 Of the soundtrack, composers Danny Bensi & Saunder Jurriaans say, "We had a great time scoring Countdown full of moody analog synths, atonal string orchestras and piercing jump scares. We tried to stay true to a traditional horror score but added some of our own unique twists and unpredictability!"

When a nurse downloads an app that claims to predict the moment a person will die, it tells her she only has three days to live. With the clock ticking and a figure haunting her, she must find a way to save her life before time runs out.