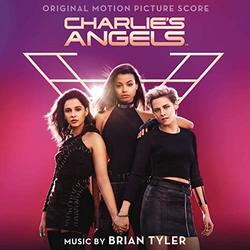 "It was an absolute pleasure composing the score for Charlie's Angels for the incredible director Elizabeth Banks," says composer Brian Tyler of the score. "Together we endeavored to create a score that enhanced the mystery, action, fun, and power of the movie while giving a nod to the movie's 70s roots. I composed new themes for the film that would feel nostalgic yet fresh and also work playing alongside the theme from the original TV series. The sonic elements of the score conjure up a variety of musical styles: symphonic, hip-hop, and 70s groove. I played many instruments on the score myself such as guitar, vintage drums, Rhodes piano, vibes, and electric bass. I then recorded and mixed those elements in a way that would sound like they were sampled off vintage albums, a technique often employed in hip-hop. I also conducted the Hollywood Studio Symphony which provided an epic feel and a deeper emotional context. In addition, I had a blast with two nu-disco songs ('Euphoria' and 'Neon Sky'), produced under my electronic music moniker Madsonik. The movie was an absolute joy thanks to the amazing team lead by our director Elizabeth Banks. I hope everyone enjoys listening to this album as much as we enjoyed making it!"

Director Elizabeth Banks takes the helm as the next generation of fearless Charlie's Angels take flight. In Banks' bold vision, Kristen Stewart, Naomi Scott, and Ella Balinska are working for the mysterious Charles Townsend, whose security and investigative agency has expanded internationally. With the world's smartest, bravest, and most highly trained women all over the globe, there are now teams of Angels guided by multiple Bosleys taking on the toughest jobs everywhere. The screenplay is by Elizabeth Banks from a story by Evan Spiliotopoulos and David Auburn.