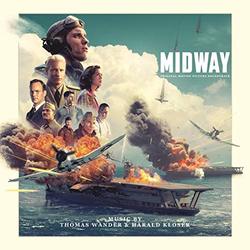 The Original Motion Picture Soundtrack to Roland Emmerich's World War II epic Midway with music by Thomas Wander and Harald Kloser has been released digitally today and will be available on CD on November 22nd, exclusively from Music.Film Recordings.

"We agreed that the music for Midway should not be a traditional wall-to-wall orchestral score, with sweeping action cues where every change in mood and sentiment will be followed musically. We also set ourselves the goal that the orchestral pieces should be limited to the emotional moments of the film. Early on we asked our long-time collaborator Tommy Schobel to create some sort of musically driven sound design, using synth-based versions of sounds old war planes would make, but in a way so they make sense within the bigger picture of the score. When you hear these cues in the film, married with all the sound effects, it all becomes—quoting our re-recording mixer Greg P. Russell—'A Thing.'" – Thomas Wander & Harald Kloser, Composers

"I was asked by Harald and Roland if I had any big band songs recorded and would I be interested in performing a song in Midway. This was all happening last minute because they had just added a scene with a singer. Of course, I said yes immediately! Harald had pretty early on decided that "Jersey Bounce" would be the instrumental. "All or Nothing at All" was my top pick for the vocal track because it was the most fitting lyrically and emotionally for the film, and I just fell in love with the melody and Frank Sinatra's 1939 version with the Harry James orchestra. What an honor to be the one singer asked to do this. We purposely did only two or three live takes of each song so we could keep the live feel. I'm very happy with the outcome. In preparation, I studied the enunciation of the era and did my best to give it that extra 1940s vintage sensibility. I was in heaven in a musical world and setting that allowed me to shine in a genre that I adore and respect so much. It's been the best experience to work beside such amazing talents. Almost everyone in the film is also a musician! Such a dream come true for me." – Annie Trousseau, Singer