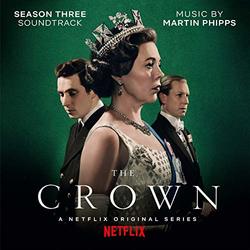 Sony Music today releases The Crown (Soundtrack from the Netflix Original Series) with music by BAFTA and Ivor Novello Award-winning composer Martin Phipps. Available everywhere now, the album features music from the third season of the critically-acclaimed Original Series, which is available to stream exclusively on Netflix.

Of the soundtrack, composer Martin Phipps. says, "It was a great honour to pick up the musical reigns on this pitch-perfect show, and so rewarding to collaborate with Peter Morgan and the team of directors. The genius of The Crown is its ability to find the human stories inside the heightened world of the monarchy. In Season 3 we tried to connect the score less with the grandeur and pomp of our characters surroundings, and more with the emotion of their personal journeys. This translated, musically, into a shift away from thick, pulsing orchestral textures, and more towards minimal, singular sounds. The score still needed to have depth and gravitas though, and I hope we feel the suppressed power of the establishment lurking beneath these more personal melodies."

The third season of The Crown sees a new guard sweep into Downing Street, as Queen Elizabeth (Olivia Colman) and her family struggle to meet the challenges of a rapidly changing Britain. From cold-war paranoia, through to the jet-set and the space age – the exuberance of the 1960s and the long hangover of the 1970s – Elizabeth and the Royals must adapt to a new, more liberated, but also more turbulent world. Written by Peter Morgan, The Crown also stars Helena Bonham Carter as Princess Margaret, Tobias Menzies as The Duke of Edinburgh, Josh O'Connor as Prince Charles, Erin Doherty as Princess Anne, Ben Daniels as Lord Snowdon, Jason Watkins as Prime Minister Harold Wilson and Charles Dance as Lord Mountbatten. The Crown is produced by Left Bank Pictures, in association with Sony Pictures Television, for Netflix. Season 3 released globally on November 17, 2019.