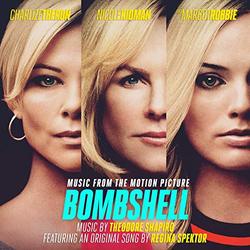 The soundtrack debuts with Regina Spektor's original song, "One Little Soldier," which is also featured prominently in the motion picture.

"As we watched this amazing film on director Jay Roach's couch - we all had an incredibly moving experience. The film was fun, nuanced and smart. The scenes and feelings stayed with me for days," Regina says of her experience with the film. "They wouldn't leave me until I sat down and wrote a song. A few days later we were already recording it, and by the 2nd day of recording I was back in Jay's house as he listened to what his film so directly inspired. It felt like the quickest and most wonderful way to make art!"

In addition to Spektor's original song are 19 compelling tracks from acclaimed composer Theodore (Teddy) Shapiro featuring vocals by Caroline Shaw, Petra Haden and Susanna Hoffs. "Bombshell is ultimately a film about women telling their stories," said Shapiro. "My first thought in approaching the film was to honor that idea by incorporating women's voices into the score. The pulsing 'ha' syllable that runs through the vocal writing does a lot of things. It can feel robotic (underlining the idea of women presenting a false persona to the camera), disoriented (as many of the characters are throughout the film), and at the end of the film almost like empowered laughter. I was fortunate to work with three incredible singers on this film: Caroline Shaw, Petra Haden, and Susanna Hoffs ... that there are three singers to match the three main characters of the film is unintentional, but certainly feels like it was meant to be."