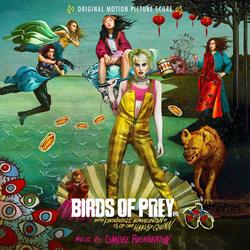 WaterTower Music is excited to announce today's release of the score for Birds of Prey (And the Fantabulous Emancipation of One Harley Quinn by Daniel Pemberton. Directed by Cathy Yan, and co-produced by star Margo Robbie, the film was released in theaters February 7, 2020.

"One of the best things about writing this score was the fact I felt Harley Quinn as a character would be into anything – I can see her listening to whatever she wants: opera, metal, hip-hop, EDM, rockabilly, gospel, pop. I always felt she didn't really care for one thing – she'd absorb them all and not give a f*** if anyone thought it was cool or not. So, I felt I'd do that with the music. In the same way she dresses like no one else, pulling disparate styles together to make something her own, I wanted to do the same with the score. Then couple that with a crew of other great larger-than-life characters and the completely unique take on Gotham that director Cathy Yan has created, a world with a kaleidoscopically colorful palate, you have something very special to inspire you.