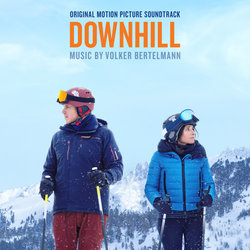 Fox Music and Hollywood Records release the original motion picture soundtrack to Downhill, directed by Nat Faxon and Jim Rash. Inspired by the acclaimed 2014 Swedish film Force Majeure, a married couple is thrown into disarray after barely escaping an avalanche during a family ski vacation in the Alps, and they are forced to reevaluate their lives and how they feel about each other. Julia Louis-Dreyfus and Will Ferrell star in this biting comedy.

From the start of Downhill, there's a sense of foreboding, even before the Stanton family come face to face with an avalanche. That feeling of uncertainty comes from a combination of camerawork, the sight of avalanche-blast cannons on the mountainside and the film's doom-heralding score.

"We knew the presence of music would be important," says co-director Jim Rash. "So with our composer, we literally wanted to create the presence of Austria, and that came through yodeling. Yodeling is inherently funny, but he suggested there are modern ways that people are using it differently."

Here, the refrain of yodels provides a kind of siren call of danger ahead. "I thought it would be nice to have a local color in the film music without getting too cliché or too traditional," says composer Volker Bertelmann, who has been skiing in the Alps since he was a young child. "I had the feeling that we could use traditional instruments, vocals and the tonality of the yodeling music, which has, by the way, a lot in common with blues."

Bertelmann created an eerie effect by blending notes and looping yodeling-inspired vocals.
"Traditional yodeling is usually faster," he says. "I took elements like (blending pitches) and the way the vocals are sung to create a connection to the Alps and a kind of unique interpretation."

The score was recorded at East Connection Music Recording Company with the Budapest Art Orchestra.