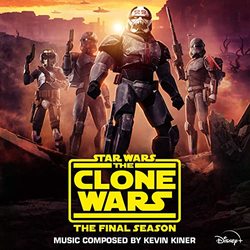 The Emmy Award-winning animated series Star Wars: The Clone Wars returns for its epic conclusion streaming only on Disney+ beginning February 21. With ambitious, groundbreaking computer animation from Lucasfilm Animation, classic characters, astounding action, and the timeless battle between good and evil, Star Wars: The Clone Wars expands the Star Wars story with all new adventures set in a galaxy far, far away.

Kiner said, "It has been such a fantastic ride scoring Clone Wars and working with Dave Filoni and George Lucas was a dream come true. I feel like season seven is everything we all wanted Clone Wars to be, top to bottom. From the music to the animation to the story lines to the directing, this is the show I always wanted to be a part of!"