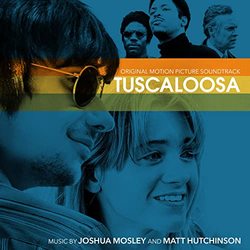 Lakeshore Records will release the Tuscaloosa Original Motion Picture Soundtrack with original music by Joshua Mosley and Matt Hutchinson. The 21-track album is available digitally via all major platforms on April 10.

The film is set in the richly textured time period of 1972 with a backdrop of Vietnam war protests and racial tension sizzling in the late summer heat of Tuscaloosa, Alabama. It is the debut feature directorial effort by filmmaker Philip Harder. The film is produced by Patrick Riley. Executive Producers include Scott Franklin, Brian & Josh Etting, Jenny Daly, Erik Helgeson, Daniel Riley, Glasgow Phillips, and Tate Donovan. The film stars actors Natalia Dyer, Tate Donovan, Devon Bostick, and YG. Tuscaloosa is distributed by Cinedigm and available now on Digital including AppleTV, Amazon, and VUDU.

This is the first feature film collaboration between Mosley and Hutchinson, who have worked on multiple previous projects. They approached the score with a commitment to helping tell the story of the key characters, using a variety of stringed instruments performed at times in unconventional ways. Through heavy effects processing and ultimately stripping down many elements of the heavily layered score, the sound of the film was revealed.

Said composer Josh Mosley, "There were a lot of facets to this film that helped inform the score when it came time to start putting our palette together. One of the things Phil talked to us about was this undercurrent of danger. But it was also a seemingly more innocent time, and part of this story is our main character, Billy, coming to terms with some of these harsh realities. In order to echo these ideas musically, we decided to take seemingly ordinary or traditional instruments, and manipulate them somehow to sound distorted, broken, but still beautiful and emotional."

Composer Matt Hutchinson stated, "There is beauty in Tuscaloosa, but within that is a mental institution where Billy spends most of his time and the civil rights movement swirling around him, and an almost punk-rock attitude that many of the characters exude. The music needed to somehow encompass all of that texture. Working with Josh, we experimented extensively to try and find the secret ingredient for Tuscaloosa. Ultimately, it was our director Phil who kept asking us to take these beautiful musical expressions and find a way to mess them up a little bit. And it was that direction that ultimately set the course and set the tone for Tuscaloosa: broken and dangerous and beautiful - all at the same time."