WaterTower Music Announces 'Self Made: Inspired by the Life of Madam C.J. Walker' Soundtrack Release 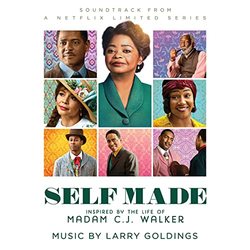 WaterTower Music is excited to announce today's digital release of the soundtrack to Self Made: Inspired by the Life of Madam C.J. Walker (Soundtrack from a Netflix Limited Series). Based on a true story, this popular Netflix series stars Octavia Spencer, Tiffany Haddish, and Carmen Ejogo in the story of an African American washerwoman rising from poverty to build a beauty empire and become the first female self-made millionaire. The score is by Grammy-nominated pianist and composer Larry Goldings. The soundtrack also includes his arrangements of several songs from the era, including the track "Sweet Kisses [feat. Tiffany Haddish]."

Goldings, whose composing inspiration takes from a lifetime of performing and absorbing jazz, pop, electronic and classical orchestral music, crafted the score with the intention of integrating hybrid styles. With a nod to the contemporary songs woven into the musical fabric of the series, the composer created overtly modern, back-beat oriented cues and hybrid jazz/ hip-hop tracks. These reference the series time period (roughly 1910 - 1920) via instruments associated with ragtime and early jazz (piano, trumpet, trombone, saxophone), providing subtle texture within a more contemporary musical context.

Goldings explained the process in depth. "When I first took on the Madam C.J. project, the producers were interested in a score that included early 1900's period-sounding music. They asked for and I created an "aural mood board" for several scenes—based only on reading the script—somewhat favoring an early jazz feel.  Producers Nicole Jefferson and Elle Johnson loved it, and really connected with my music for the Sarah/Addie boxing scenes, in which I composed around a trumpet melody using it as the basis of a stream of consciousness track that conveys the dreamlike quality of these scenes.

"There was also a want for some contemporary-sounding score elements," the composer elaborated. "Taking a cue from licensed music incorporated into the series, I took musical themes from my mood board and, "deconstructed" them into more modern-day tracks with the addition of soulful bass lines and drums (with help from the gifted Abe Rounds). These funkier themes are associated with Madam C.J. and other characters and help signal the viewer at pivotal moments in the series. Still, there was plenty of need for quieter, emotional cues, which I instilled subtly with jazz harmonies and instruments of the era."