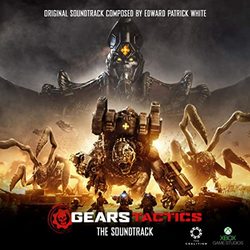 Laced Records and The Coalition are proud to present the soundtrack to Gears Tactics featuring original music by composer Edward Patrick White. The 17-track album is available digitally via all major platforms on April 20th. White, who also orchestrated, programmed and mixed the album, pays tribute to the DNA of the Gears of War franchise while also ushering in a fresh new sound for Gears Tactics.

Gears Tactics is the fast-paced, turn-based strategy game from one of the most acclaimed videogame franchises—Gears of War. Outnumbered and fighting for survival, recruit and command your dquad to down an evil mastermind who makes monsters. Gears Tactics is available April 28th on Windows 10, Steam and Xbox Game Pass for PC and will come to Xbox consoles later this year.

The top-down tactical game provided White and the audio team an opportunity to build a musical language to service the turn-based gameplay. The score was the result of a two-year evolution of the sound and a complex system of musical storytelling.

Said Composer Edward Patrick White, "As a huge fan of the Gears of War franchise, scoring Gears Tactics was a dream project. This game is a love letter to fans, and the process of helping to bring that to life was challenging and very meaningful. From my perspective, the music has been made with the same love and reverence as the rest of the game. We made careful, thoughtful decisions with reference to other Gears IP including novels, etc. and it was very informed by the franchise. It's my baby."

Said The Coalition Audio Director John Morgan, "I was excited to hear Edward's soundtrack as it was coming together, and I could hear the influence of our previous Gears scores on his writing and how he was paying homage to our early Gears of War games. His soundtrack very much grounds Tactics solidly in the Gears Universe, yet has the ability to take the gamer into a much more intelligent space that you'd expect from music while playing a strategy game."