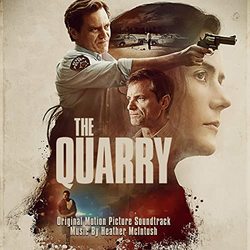 Of the soundtrack, composer Heather McIntosh says, "I tapped into a new lyricism in my writing with the score to The Quarry. It was first unlocked in the 'Purple Flowers' theme and then it unfolded in variations throughout the rest of the score. The open landscape of this film gave me room to stretch out the melodic line over shimmering textures of flutes, percussion and guitars in a way that felt fresh and strangely familiar. The cello has always been a vital part of my writing process, but it has been a minute since I just picked up the cello and let it speak."

The Quarry director Scott Teems adds, "The Quarry is my second collaboration with Heather McIntosh, and her work continues to thrill and inspire me. With this film, I believed she's pushed through to exciting new musical territory, building off her cello base to create a rich and haunting soundscape for a town full of lost and wounded souls. Yet as it reaches into the darkness, the score never loses its poetry, its evocative themes or its striking unity. This is powerful music that tells a story, and I'm humbled that it's a part of my film."