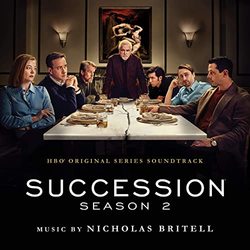 WaterTower Music today announced the May 22 release of the soundtrack to season 2 of the HBO original series Succession, which features the music of Emmy winning and Academy Award nominated composer Nicholas Britell, which includes the official studio recording of "L to the OG" - the track performed in the show by the character of Kendall Roy (played by Jeremy Strong).

Created by Jesse Armstrong, the second season of HBO's Succession (Golden Globe, PGA and DGA winner for Best Drama Series), begins where season one dramatically left off. The season follows the Roy family as they struggle to retain control of their empire, and while the future looks increasingly uncertain, it is the past that threatens to ultimately destroy them.

Comprehensive discussions about season 2 with Succession creator Jesse Armstrong inspired composer Nicholas Britell to explore an even darker and more brooding musical tone. A tonal shift, apparent in the saga of troubled former heir apparent Kendall Roy, informed the composer's creative approach. "Kendall's journey starts in a very melancholic fashion – and that was my initial inspiration," explained the composer. "I wanted it to be like the second movement of a symphony; still connected to the first, but with a decidedly different tone, tempo and development. "I composed a new theme for this - "Rondo in F Minor for Piano and Orchestra - Kendall's Journey," which takes many forms through the second season and inhabits a sort of contemplative—yet suitably minor-key - tone. I really wanted to make sure that the music evolved along with the Roy family's own developments."

New themes and musical evolutions are indeed prominent in Britell's season 2 Succession score. From the "Moderato Con Brio" and "Contredanse - Shiv's Move" to the "Intermezzo in C Minor - Money Wins" and the climactic "Concerto Grosso in C Minor - You Have to Be a Killer" which concludes the season finale. These and many additional key musical moments from season 2 are included on the soundtrack, including "Kendall's Departure - This Is Not For Tears," the Cello Quintet from Tern Haven, and of course the music from the scene "Boar On The Floor".

"L to the OG," the final track on the album, performed by the character of Kendall Roy, has also been released as a single, along with an instrumental version of the track. "Kendall's performance of this had to be something which was both incredibly cringeworthy and also really well-executed: a very difficult combination," elaborated Nicholas Britell. "To me, Jeremy Strong's rendition truly captured Kendall's serious efforts in creating the rap, while also perfectly balancing Succession's tone of dark absurdity.

"It was a true joy to compose the music for Succession season 2. From the very beginning of my collaboration with creator/showrunner Jesse Armstrong, he has been incredibly supportive and open to exploring the ways in which music could live within the show."

WaterTower Music head, Jason Linn commented, "After years of admiring Nicholas's brilliant work from afar, we're honored to finally be collaborating on Succession. The character he has created with his remarkable and indelible score is the perfect complement to HBO's culture defining series."