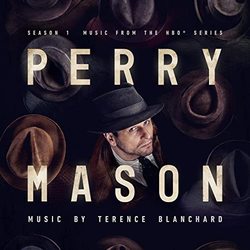 WaterTower Music is excited to announce today's release of Perry Mason: Chapter 1 (Music From The HBO Series - Season 1), which stars Matthew Rhys, and features 7 tracks from the show's 1st episode. The five original score tracks were written by the artistic force that is six-time Grammy-winner, Oscar-nominated trumpeter/composer Terence Blanchard (Da 5 Bloods, BlacKkKlansman) who is featured on several of the tracks. The 2 jazz standards on the album feature Luke Carlsen and were performed by The Perry Mason New Year's Eve Band. As episodes air, fans can look forward to additional music being released over the course of the season, culminating in a soundtrack at the season's end.

The prolific and highly respected musician discussed his work on the project. "Tim Van Patten is an amazing storyteller. Every inch of the screen is utilized to create a cinematic journey that is captivating and exciting. It is an honor to work on a series whose direction is so clear and able to take chances that are so daring. This is not your parent's Perry Mason," Blanchard continued. "I tried to create a mixture of sonic colors from the period without being bound to it. At the same time, I wanted to create something contemporary and fresh."